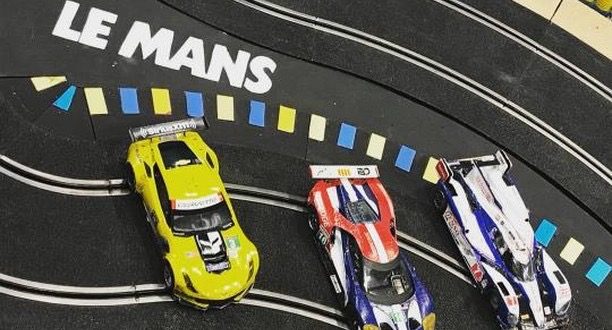 A 3D-printed model of the Ford GT LM has won the 7th edition DiSCA Le Mans 24 hours in the hands of a rookie team.

Catalonian team DitSlot i3D had only competed in one previous oxigen racing event and had never been to Le Mans prior to their 2018 entry in the GT Category. However, composed of some of the finest drivers and mechanics in Europe they were never to be underestimated despite their rookie status. The experience and speed which the five man team possessed became testament to their extraordinary success.

The car was an evolution of the 2017 car entered by the Gasclavat team, lead by Arrow Slot designer Albert Atienza. Together with a brand new chassis from Besay Porta of i3D, the model was presented in an attractive fashion with side running lights equal to the cars that contested the 24 hours of Daytona.

In LMP1 the predicted battle between Rockingham’s Toyota TS030 and the Nissan GTR-LM of seven time returnees Posillipo Slot Club was underway from the first lap of free practice. The Italian Nissan looked to have the edge of the British Toyota in terms of raw speed, with the Northants club lacking a few crucial tenths in key areas. Rockingham would also suffer control communication issues as a result of incompatible firmwares which would plague their quest to improve the setup, a problem which would only be fixed some hours in to the race itself.

Fortunately for the British squad the longevity and reliability of their car saw them establish and then hold an edge over Posillipo from the five hour mark. Late issues for the Neapolitans crushed any final ambitions for prototype glory and it would be the Rockingham Toyota that would see the chequer in the lead of the category and in second place overall. BB Slot Vikings suffered multiple issues on their Audi R18 e-tron quattro but managed to come home third in LMP1, ahead of debutants Webland 2000 running a Lola B09 coupe.

LMP2 was perhaps the fairest four-way fight in the race with teams from Olifer and Hopeful Six running experimental Oreca 07 models, Demon Slot running an Audi R10 and the second Nissan GTR-LM entered under Alibaba Slotshop by Antonio Aliberti (driving with Possilipo). The stunningly finished Valliante Rebellion livery on the Olifer Oreca 07 would qualify fourth on the grid. The attractive model, complete with scale pit crew, was an absolutely stand-out during the Concours de Elegance, and would win the price for the best presented car.

By contrast the Demon Slot Audi would start from the back row of the grid as the experienced Welsh crew searched for a setup in their new Red Dragon 3DP chassis. However, come the race we would see the situation reversed somewhat. Both of the GRP laminated Oreca 07 bodies of Hopeful Six and Olifer suffered in the battle of competition, with each of the teams forced to switch to their spare body. Meanwhile the Demon crew had stoked the fires and the car would rise to an impressive fourth overall, overtaking the ailing Posillipo LMP1 Nissan in the final stages of the race and earning the team the LMP2 category victory.

Finally to GT where were it not for a small performance differential, DitSlot might not have had it all of their own way. Right on their tails for the entire race was the Slotracing for Holland Corvette C7.R which demonstrated blistering pace in the hands of star drivers Stefan Kievit and Lennard Maan. The thundering yellow machine would attain a third position overall and second in GT, which is a noteworthy achievement. This time though, the limelight was taken by the blue oval from Catalonia.

A final mention to the Red Dragon Racing team from Llantrisant, who prepared a beautifully presented Ferrari 458 Italia. The car drew a lot of attention and only narrowly lost out in the Concours d’Elegance. The team were awarded the Spirit of Le Mans for improving on their previous best total distance by over one thousand laps.