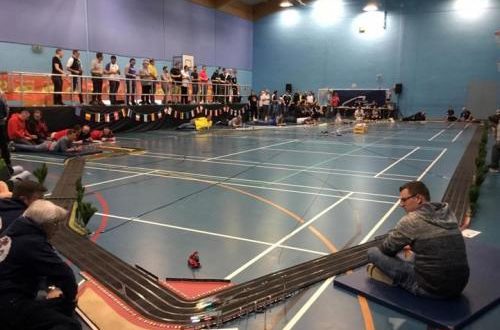 This article has been written by the Worthing Digital team captain Andy Player. Andy runs a Scalextric Digital club in Goring-on-Sea with team mate Mike Dadson, and the club made their debut at Le Mans in 2019.

With jaw-dropping events like the annual DiSCA Le Mans 24 Hours, it’s easy to see how so many analogue and digital racers are tempted by the Slot.it oXigen system. For a Scalextric digital racer like me, there is the excitement of having up to twenty high-performance cars on track (sixteen for the Le Mans race), rather than the usual six. Analogue racers can use familiar cars, track and Slot.it controllers, although negotiating other cars in the same lane takes a little getting used to.

After a first oXigen race last summer at Rockingham Slot Car Club, I was part of the Worthing Digital team at the 8th running of the DiSCA Le Mans 24 hours a couple of weeks ago.

The four-lane Le Mans Ninco layout is stunning – filling the entire sports hall at Warwickshire College’s Henley Sports Centre – and brought to life by some superb scenics. Oxigen will run on any track system that offers digital lane changers, including Ninco which is popular with so many analogue slot car clubs. Each Ninco lane changer must be fitted with an oXigen circuit board – and that’s the same if you’re using Carrera track and lane changers. Scalextric lane changers work with oXigen and the newly-arrived Policar system is oXigen-compatible too.

There’s no oXigen powerbase as such, wiring DC power supplies to provide constant power around the layout does the job perfectly. Magnets glued under the track signal the start/finish line and pit lane entry and exit via a Hall Effect sensor in each car.

As for the cars, they all need an oXigen chip, which are controlled directly via a 2.4 GHz radio connection. This gives a much cleaner link than the traditional method of sending digital command signals through the track rails. Slot.it SCP1 and SCP2 controllers require an oXigen radio cartridge fitted, although the new SCP3 is oXigen-compatible out of the box. The controller to chip link is not the only communication going on, an oXigen race is run via the big yellow oXigen USB dongle that communicates with the chips in the cars.

Oxigen is certainly a complex digital system and although expensive, it is good value for the quality and reliability of each component and of the overall package. All the components receive full support from Slot.it, including regular firmware updates.

But back to the big race… Our Worthing Digital Audi R10 TDI (outside front row, above ) ran in the LMP2 class. Unlike the LMP1 and LM GT classes, the P2 cars must run with an inline motor configuration. Our car was based on an Olifer 3D printed chassis designed to fit the Avant Slot Audi R10 body. We used a Slot.it offset inline motor pod with a combination of Slot.it, NSR, Sloting Plus and Avant Slot components, plus a few parts heavily modified or built from scratch by our car builder Mike. The Slot.it MX16 motor and N18 tyres were hand-out parts fitted at the start of qualifying on Friday evening.

The schedule for the weekend is as authentic to the real Le Mans event as the track and the scenics. It is a Le Mans slot car event delivered by passionate devotees of the iconic twenty-four hour race. Through the three qualifying sessions, we gradually got our Audi going better and all six drivers in the team gradually increased in confidence. However, we were still a way off the pace of our more experienced rivals. Starting fourteenth on the grid (thanks to penalties for two other teams), our first driver Alex had us up in eleventh place and second in LMP2 with twenty four minutes gone. That was as good as it was going to get.

With much to learn about running the car over twenty four hours – including in the dark – and dealing with our fair share of mechanical issues, we found ourselves running steadily in fourteenth place overall. A major re-build with six hours to go saw us finally lose touch with the twelfth and thirteenth place cars – and any hope of an LMP2 class podium. However, we did now have a car that was significantly better than it had been at any point in practice, qualifying and the race. Although the gearing was still a little conservative for the long Mulsanne straight, we were suddenly on the pace of many of the cars ahead of us. It was an exceedingly enjoyable – and encouraging – six hours.

Ahead of us, the LM GT Ferrari 458 of the Posillipo Slot Club from Naples was having a spectacular run. Not quite as quick as the LMP1s over a single lap, the Posillipo team had the speed and consistency to lead from the third hour until the end. The German Prospeed team’s Corvette C7R was never far behind, with the LMP2 class winners Demon Slot Racing keeping their Lola B12 in the mix as the super-quick LMP1s of Rockingham and Roadkings struggled with reliability. It was fascinating to watch and learn from the top teams, including some – like Posillipo – who have raced in each of the eight editions of the event. There was some superb car preparation and breathtaking digital driving ability on show.

I can safely say that I have never raced at a slot car event that came close to the 2019 DiSCA Le Mans 24 hours – the vision and hard work put in by the organisers was self-evident and the execution was near-perfect. This race truly is the pinnacle of competitive digital slot car racing and we plan to be back in 2020.